I guess David and I are starting a new tradition.  Last August just about this time we got into the car and headed toward Oklahoma.  After several turns we found ourselves at the Arkansas Diamond Mine Park.  We had a delightful time digging for diamonds.  We came home sweaty, sun burned and none the richer but we had a grand adventure.

This year we packed an overnight bag and headed north once again without an idea of where we might end up.  First order of business was lunch at Beaver's Bend State Park on the deck looking toward the river. We dipped our feet in the frigid water and enjoyed the sun on our backs and the birds of prey circling above our heads above the butte.

After lunch, David's homing device automatically turned east and headed for the mountains in Arkansas.  After traveling the roads less chosen by others who were on the interstate, we ended up traveling north on Hwy. 71 up to Mountainburg, Arkansas.  It is a beautiful stretch of road. Then the lure of a beautiful sunset lead us to Winslow and a charming bed and breakfast that looked to be an old motor court.  Winslow is at the top of Mount Gaylor in the Boston Mountains which are a part of the Ozark mountain range.


That night after everyone else was in bed we crept out of the cabin and went to an old tower area and took our first pictures of the stars in the heavens.  Unfortunately, I left the instructions on how to do such a feat on my desk in Paris so we had to wing it until we got what we thought were awesome images. We played until after midnight and the clouds took over the night sky. 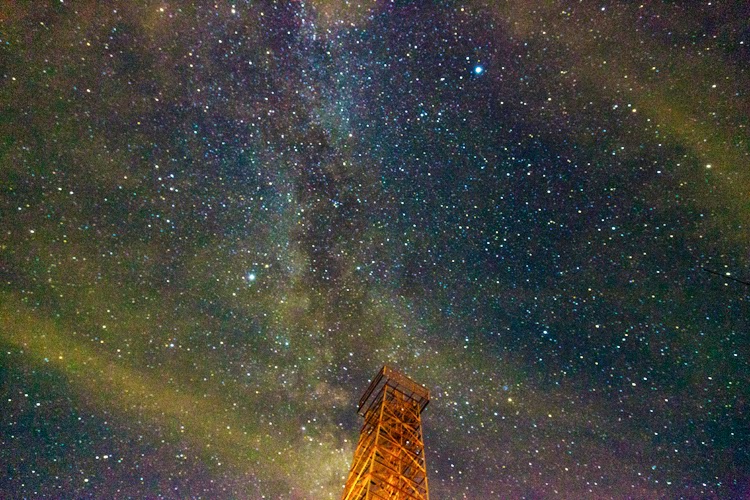 After just a few hours sleep, we were up before sunrise and drove to Artist's Point to try and capture the mist in the valley.  It was lovely.

I am so glad I am married to someone who loves to photograph as much as I do! It was a fun trip but we were two tired old people ready to get back home and sleep in our own bed!